The Healthy Side of life...

So i deicded i should probably start doing something with all this time off i have instead of just eating, sleeping and watching terrible tele.
So low and behold i decided i would go and re-join the gym and surprisingly it was actually not badly priced at £20pm.  Plus my brother goes to the gym too, so i can tag along with him, and everyone is getting back to work and uni soon so it will give me something to do during the day plus all the people i don't like won't be there as they'll be at work or whatever so i'll have free rain to go and do what i want and look like a beetroot without any judgement.

So i also thought once i get back to the gym i should probably start eating slightly better, don't get me wrong i don't have a really bad diet, i don't eat takeaways very often actually it's once in a blue moon, even with subway and McD's etc i hardly eat in those places unless it's just a quick lunch and even then it's only a burger and chips as i don't eat the caloric stuffed stuff coz i'm still a bit fussy aha.

So last night i decided there really is nothing better than a stir fry to kick off the good healthy kick and i adore a stir fry, just because you can put in it what you want and you make it to taste, it's just the best, plus you know exactly what you are eating.
Last night i made myself and mum n dad a stir fry and not to boast but it was soooo nice, and they are so easy and quick to make, if anything the preperation takes a while, but i found the easy way out but the pre prepared stuff if you can't be bothered because really it's not that expensive.

This was my stir fry: 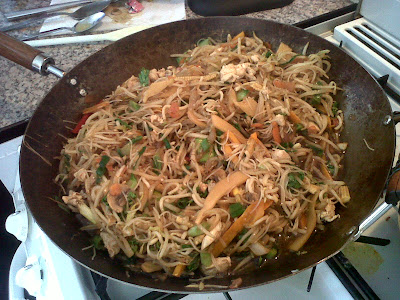 So i'll give you guys a quick run down on what i used.

that what was i used,
firstly i put in sesame oil for taste with 2 cloves of chopped garlic and 1 bit of ginger grated, this automatically gives flavour and gives the taste to the oil which will be carried through, add in the veggies in accordance with what takes longest etc, pak choi and syboes last as they just get a swish and no more of they will go soggy, add in soy sauce to add taste, then oyster sauce which coats it and also gives it the full flavour, let it boil through then ta dah Dinner!!

So lets see how long my healthy lasts, but i will still be eating what i want, i don't cut out and i don't diet it's pointless, as when you cut out one thing you pile in other bad things, so moderation its whats it is all about.