sorry for the lack of posts lately i've had a busy week.  But i'm back and i am going to get posting asap.
I know it's no spring anymore it's almost Autumn, but i decided to give my cupboards a bit of a spring clean yesterday as i'm one of those people who tries to organise stuff but then i just keep buying and throw it all in my cupboard and then i can't find anything...
that's what happened yesterday when i was looking for a new facewash so i gave in and pulled everything out to give everything the once over.

So i have a wall of built in mirror wardrobes with shelving inside where i keep all ym stuff so once it's closed everything looks neat and tidy even though it's actually a tip inside!! 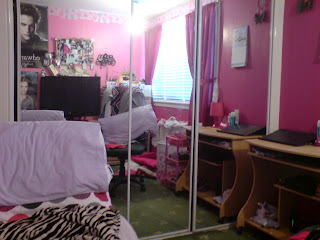 so that's what i usually do, just close the door and everything looks tidy.
Sorry i dont have a photo of what it looked likebefore i started cleaning i should have snapped one but i totes forgot too!!
i'll see if i can spy one.

But to be honest my cupboard was well overdue a tidy out...so i started and it keep coming and coming i was like why do i have all this stuff? 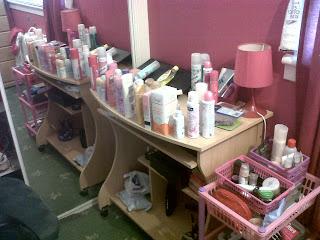 so once i'd pulled out the front stuff which was just under half of it looks like this... Ridiculous.

I realised once i pulled everything out that some of it was out of date because i'd had it for so long, but i think i'm one of those people who buys stuff when it's on a deal or its cheap or reduced because i just think well i'll need it eventually, but then i put it in my cupboard at the back and i end up never getting to it becuase i can't be bothered to pull everything out to get to it.. so i decided money wasting stops here as i don't have the bloody money to waste on stuff i don't get around to using.
So i threw out 40 bottles of lotions and potions and bits and bobs of other stuff.
It defo need it, i never realised how much stuff i had until i cleaned it out, i was quite shocked actually. so it stops i will only buy when i know i am running low on stuff and i won't just hang on to stuff.

So anyway that's my cupboards cleaned and everything organised, no more spur of the moment buying for me!!

clean and tidy it is!! 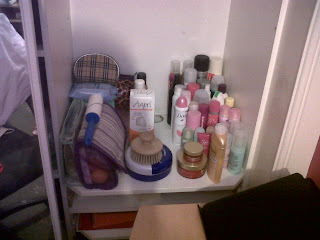 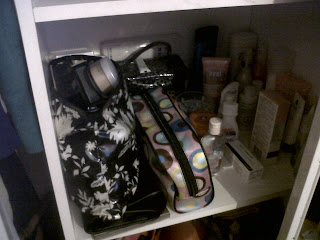 top photo is the shelf where i keep all my bath, body and hair stuff all organised and my wee toold and stuff.
the bottom photo is my make-up shelf with my make-up seperated out and my eyelashes and just face washes and moisturisers :)

all neat and tidy.


I've had a funny but busy week this week!
Job centre was boring as always on Wednesday and i'm starting to get quite annoyed at the fact they keep telling me to spply for jobs even thought i keep telling them thats not what i studied in my degree, honestly i've tried to explain time after time what a 'biomedical scientist' is and its not a pharmacist. ARGH!

Then on Friday i randomly met my Aunt, well my dad's sister who i have never met once in 24 years, she just randomly appeared on the doorstep having not seen my dad for over 3o years, it was quite surreal, and to be honest i still don't really know what to make it, she is nothing like my dad or any of his other brothers and sisters ... but owell i met her and that will probably be the first and last i do.

anyway i'm off to get stuff done and i'll blog later again!