Haircare is a world all of its own so i often find myself picking new wee things up every now and again.
this was one of these random such buys, but i always end up just sticking with Aussie because i've used it for so long but its starting to do nothing for me.
as the aussie philosophy goes "there is more to life than hair, but it's a good place to start" indeed it is so here is my latest buy.

So as you know i bought this a while ago now about 3 months or so and have been using it so thought it was time to see how it went. 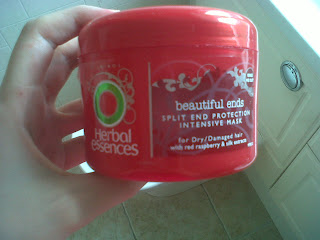 I can't get hold of it in Boots, but maybe bigger boots stores will sell it, i know bodycare do sell it too.
the tub is a good size and does last ages as well.
it retials at £3.99 but i managed to pick it up for jus £1 on the wilkinsons sale rack haha. 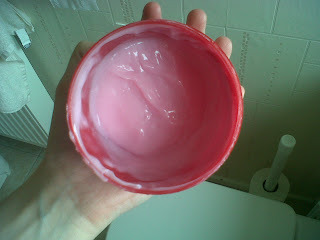 it's a nice pink colour and although it looks really runny it's actually not at all it's really manageable.

I got the red tub which is for dry/damaged hair, i do not have either of these so hence why did i buy it?
well sometimes i feel my hair just tangles as soon as i wash it and ive tried detanglers etc but they don't work, so i put it down to just having long hair.
But at a quid i thought i'll give this a try see if it does anything or even helps with my split ends.  Now split ends are enevitable i mean every girl gets them no matter how good a condition your hair is in, i love my hair but i don't get it cut as regurarly as i probably should because hairdressers are expensive and i don't have a steady income so i try my best to look after my hair in other ways, i only straighten my hair once a week if that sometimes i jusy rock the natural curl / wave and leave it be.

I started using this herbael essences mask about 3 months or so ago and i use it once a week.
to be honest it hasn't done much at all for my split ends but they were never that bad in the first place, but it has made my hair more shiny and definitly helps with the tangle issues!!
the smell itself is devine, it smells good enough to eat and the facts its pink instead of plain ol white is always nice!

plus it has lasted me for agessssssss!
I'll look into the other tubs for normal hair and see what they offer up if not i'll need to try find another good de-tangler as i've always used Aussie but lately it's doing nothing for me, except the smell is no nice i just keep with it but i am going to need to change it up!

but if yu have split ends maybes give this a try!! :)