So I done a post about a little haul i gt from the Illasmasqua sale and one of the items was a bottle of Rich Foundation.  Illasmaqua is one of those brands i've heard about but never tried and it's not long came into more departments stores etc as before hand the only place i ever seen it or even heard about it was in Selfridges in Manchester.

So anyway i Bought the Rich Foundation in shade 133 whic is for pale/light skintone, there was also two lighter ones one with pink undertones and one with gold, and call me stupid but i do not understand all this undertone business so i just went for the plain and simple foundation with no undertones as i didn't want to waste money on buying something that turned out not to be right.

This was the one that i bought: 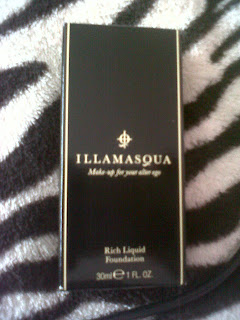 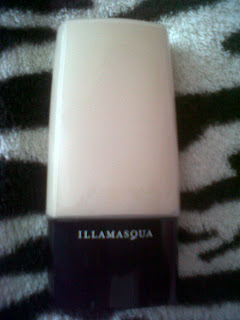 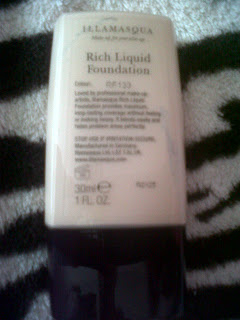 It's a 30ml size bottle and to be honest you really do not need much.

Here is a swatch of the foundation on my hand against my skin colour: 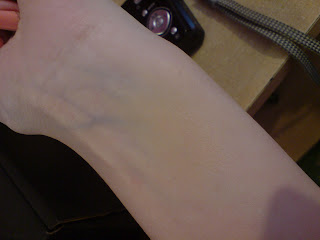 Sorry i know the photo isn't brilliant but you can see the slight colour change where i have applied the foundation.  I would say it's a pretty decent match and it's not too orange and it rubs in quite well, but i am rather pale haha so it's as good as i will get really.

The foundation itself is actually really thick although if you don't shake up the bottle first its just liquid that runs out.  You definitely don't need a lot of it to cover your face i just put a little dot on and worked it out with a foundation brush and you definitely need to use a brush as the foundation is quite thick and can take a bit of working, i found i was rubbing it in for a quite a while using my hand, but when i used the brush it seemed to even out slightly more easily.  Once the foundation is applied and it has been thoroughly rubbed in it sits really nicely on and feels so smooth on your skin it actually feel like a second skin.  My skin is pretty atrocious so this actually worked really well for me and gave me pretty much full coverage and smoothed out my skin better than most foundations have in the past.  Although it says full coverage its medium to full coverage and it certainly does do that but it does not look cakey on which is an added bonus as i completely hate the caked on make-up look.  Since it's a thic foundation i would stick to wearing it at night as i think it may be slightly too much for through the day and especially when it is a warm day!
It also has a nice smell to it which i know is completely random to say but it really actually does.

Overall it worked really well for me and it definitly delivered on just about every single point.
Also for the bonus of picking it up for a £10 it's all the more sweeet!!
it's actual price is around £25 but i would definitely pay that price for it as it works for me completely.

You girlies used any Illasmasqua products?
rate them / hate them?