Now i'm really not a fan of Pizza and i know that is like death to some people but i just don't love it and can quite happily live without it, however everyone else in my family love it, so the other night my mum decided to make her own pizzas but left me to make them and considering i don't even eat them i was like what?

She was like no you do it you have a better imagination and presentation so i set abut the task of making pizza.  Btw i did buy just plain pizza bases, so i made 5 or 6 different pizza's all with a sort of different topping and one that would sort of suit everyone.

I used tomato paste out a squeezy tube for the bases and then added a layer of grated cheddar cheese.

Then i used all different stuff and just general stuff that i had lying around the house.

between those i threw some combinations together added mozzarella to the top for the melted stringy cheese and added garlic oil to some and chilli oil to the others.

Apparently they went down well last night so hey i don't make too bad a chef and apparently all these watching of tv cooking shows is paying off.
I'll a good wife yet haha. 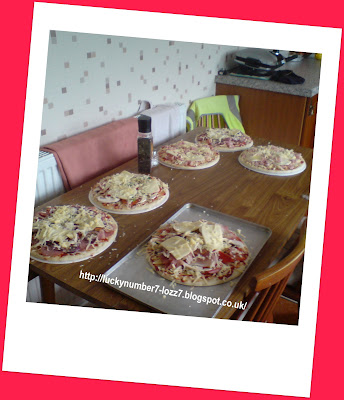 Overall these were so easy to make and you get a pack of 2 bases for only 62p and with everything else i spent no more than a £10 getting everything and i just put the extra pizzas in the freezer, total genuis dinner for such a small amount of money considering everything is getting more expensive i'm all for saving a bit of money where you can but still eating how you always have!

Email ThisBlogThis!Share to TwitterShare to FacebookShare to Pinterest
Labels: combinations, creating, make your own, pizza, variety