I do love Baking however lately i've noticed i've been doing it more and more when i've been a bit bored as it's fun and passes the time and also leaves you with lots of goodies to eat at the end of it!! :)

SO earlier tonight i decided that i would whip up some lemon tarts.
Me & my dad love all things acidic and citrus so we love a lemon tart and i decided to make them because baked goods are becoming such a luxury in the weekly shop. A Lemon tart is around £5 and considering me and my dad can easily eat a half each it's not justifiable for the money so i decided to try making it and to be honest it is so much easier than i thought it would be.

Lemons are pretty cheap now too, i bought a bag of five little fair trade ones for only 70p and they done my two lemon tarts and i just used extra lemon juice from a bottle as i like it tangy.

Anyway here's what i came up with tonight. :)

Sorry the photo os of them just out the oven and they are still in their wee cases that i made the pastry in..but once they are cool i'll dust them with icing sugar and refridgerate them. 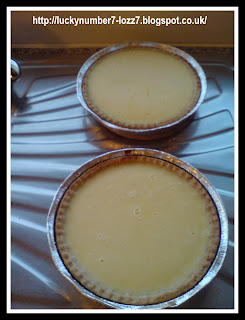 I know that they don't really look much but they are actually really tasty plus once you dust them with icing sugar they become much more pretty!!

So i'll enjoy a slice of this later with some cream.