has been and gone, had a good but busy one!!

Friday i went into Glasgow for a lunch with kirsty, christine and christina, as christina was moving back to ireland on sunday!!  can't believe she's gone after 4 years here!! gutted.

so went for one last catch up and a frewell lunch then i had to hot foot it to uni to finish a poster as my supervisor has absolutely no respect for time deadlines.

saturday i was away running errands and doing bits ans bobs, then saturday night i went up to Kirst;s and we chilled and watched LOTR, not that im a big fan but it was good :) kirsty is devoted to it so its actually not as bad as i kinda always had assumed it was, plus a wee perv maks everything better!!
we just chatted away and ate crap was great havent done that in like 6 months? or something as my life revolved around uni but im glad i can have get my free time back and be a good pal again!! :)

sunday i baked cakes!!
i baked lots of cakes haha 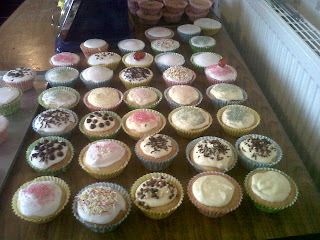 when i woke up on Sunday i found out there had been a murder of a guy stabbed to death two streets down from me, which is a bit close to home! honestly the streets are becoming so unsafe to walk even your own street, so the whole place was cordoned off for hours and we couldn't get out to the bottom of the road and the police were everywhere...so much so it was almost like having a police escort to the shop, crazy, still don't know much yet about the murder but there's lots of rumours going round.

also found out my uncle got beaten up off four polish guys on saturday night too down at the traffic lights at Strathclyde park... he was in his car and they came after him, honestly things are getting ridiculous these days, but thankfully he's alright, just a cut face and a bruised/burst lip and needs new specs.

so it's safe to say my family are now after these 4 cunts and i swear if my dads out driving and sees their car he will flip his lid as that was his wee brother they done in, honestly my dad's a beast when he loses it he'll end up in the fucking nick.

on a more lighthearted note..

today i decided i would clean out my uni boxes and try and get everything organised!! so i'm off to hop to it!!
hope you all had a good weekend and here's to a hopefully good week!!