so i've been a bit short of money lately but i'm quite obsessed with nail polishes and although i don't have long gorgeous nails, i like to keep mines painted just to make them look a bit nicer than they would if i just left them normal.

so i happened to be in town during last week with my brother and we popped into Primark i didn't plan on buying anything but i ended up buying something, couldn't resist, and since it's been a heatwave in Scotland for the past week which NEVER happens i was on the look out for some new nail polish colours and i came across this little set in Primark. 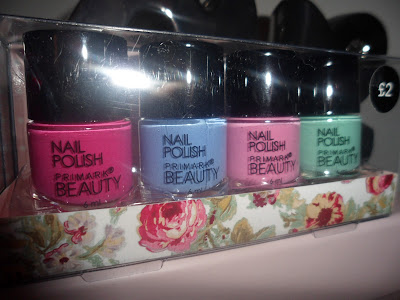 so it only cost £2 which is a bargain for 4!
they were only small though 6mls only but still good things come in small packages and all that.  But the size isn't all bad as it means you can carry them in your bag without worry and top up if you chip a nail or whatevs.  So they were actually really good, lids don't stick or jam and the brushes are actually good, not too big, but not too small either and the bristles are all straight so that stops strays putting the polish everywhere!!

they don't have any names or anything on them these were just the summer pastel shades and there were other little sets too, which i think i may go back and purchase since i really like these ones!!

so this is what they look like on my nails.. 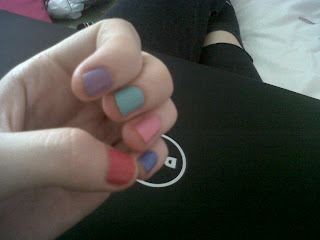 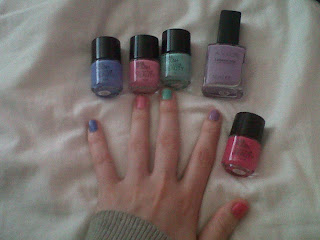 the purple one i added just so i didn't have two nails the same and it's just an Avon nail polish.

The nail polishes were easy to apply and not sticky or glupy, they only took 2 coats to look good and gave good colour and coverage, the drying time between coats was actually superfast, by the time i painted my nails the first one was dry and i could apply the second coat straight on top without any smudges or anything.  so far i've had it on for 2 days ^^ and it's not chipped or faded or anything yet which is miarculous for me as i could chip nail polish within seconds, there's no smudge marks or anything either and my hands go though some amount in a day so it's doing darn well to stay put considering i didn't use a base or top coat or anything.

overall i really like these little polishes they give what they say they would pastel nails, no problems encountered and at £2 they were a bargain i think i'll definitely re-purchase and also purchase the other sets too i mean why not?

you can get the neon set
and also a dark black and crackle set.