sorry for the lack of blogging.

been mega busy lately and today is the first day i've had time to actually relax!!

so i had my last uni exam on tuesday which i completly failed.
but my wee brother got taken into hospital on monday and he only just got out on friday so it was safe to say i was caring more for him than i was for the exam..
so i've pretty much been up and down to the hospital at any spare moments i had.

it was also my wee brothers 21st birthday yesterday but he's still recovering so we just had a quiet day.. he just wanted some chicken nuggets and we got him a cake and we just sat watching films.

we're going to go for dinner at some point when he's feeling better but for now its just bed rest for him!
lots of family came round yesterday to see him as he has a mountain of health problems so i think everyone was a wee bit worried but he looks to be getting back to himself all be it slowly!

so this was his present, but i didn't have enough wrapping paper so i gave up with it and just stuck a bow on it haha. 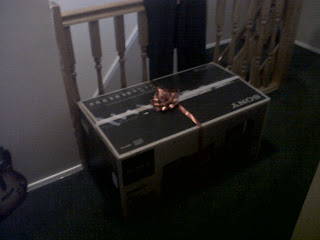 so today i had some errands to run which was to go post my ebay parcels, go to the bank, go book a van and get a wee leaving present for my wee uni friend who goes home to ireland forever come sunday!!

tonight i decided i was just going to relax so had a bath and painted my nails, tomorrow i need to go to uni to hand in a form, and my mum and i are going to Peebles to my uncles house whom passed away last month, as we were told we can have a wee momento if we want it as he requested all his things went to charity so we're going to get a wee reminder of him, although i do feel a bit bad that i'm going to rummage through my dead uncles house but its in a nice way!! my dad is also coming but he needs a van as my uncle left him a cement mixer haha this seems ridic to anyone outside my family but my dad is a pure diy/garden/builder fanatic so to him this is the best thing ever and he hasn't shut up about gettin it since he found out on sunday.

tomorrow i'll be away doing all that..
thursday i need to do a stupid posted for uni which will be a 2 hour job its 10% which isnt even worth the hassel ...
friday going to say bye to christina </3
going to miss the wee one!!
but get to go to ireland for the sake of it now! :)

all in all it's been busy stressful, worried but good last week and a half hopefully things start to improve and everything goes good.
i need less worry...wrinkles are gettin bigger haaa.
Posted by Noir. at 21:17